GP3R: WHICH CSCC DRIVER WILL WIN ON THE ROAD COURSE 19 DRIVERS WILL CONTEND FOR THE WIN

Trois-Rivières, QC  The drivers of the Canadian Stock Car Championship come to the Grand Prix de Trois-Rivieres (GP3R) with only one thing on their mind: Leave as the winner of the turn-left and turn-right event. Specialists on the left-turn ovals, they wont be going in circles this weekend. The urban street course of 1.53-mile is made up of 9 left turns and two right-handers. The only time LMS (Late Model Sportsman) cars have raced on a road racing circuit dates back to the 2004 GP3R edition. Only three drivers that were present then will be racing in the CSCC race this weekend. In 2004, Jean-François Déry left with the honours when he beat road racing specialists such as Bertrand Godin, Jacques Villeneuve (the uncle) and Jean-François Dumoulin. Marc-André Cliche (9th) and Donald Theetge were also present and are back with the firm intention of outdoing their previous performance and that does not exclude winning. Theetge will have a busy weekend, as he will also be racing in the NASCAR Pintys race, which will be held immediately before the one for the CSCC. Among the other drivers who raced the streets of Trois-Rivieres, Samuel Charland (2015), Joe Mayer (2015), Rémi Perreault (2014), Martin Goulet (2014) in stock-cars while they were competing in the Sportsman Quebec or Sportsman Lucas Oil (Autodrome St-Eustache). With less than 24 hours from the first laps being turned at Trois-Rivieres, no less than nineteen drivers are entered in the event. Many drivers are coming to the event with an impressive road racing resume. All the ingredients necessary for a great show for thousands of fans attending the Grand Prix and who will have the chance to see the drivers four times on track. The CSCC race, 41 laps or 100 km, Hotel le Concorde 41 presented by Festidrag.tv is part of the NASCAR weekend portion of the 49th Edition of the Grand Prix de Trois-Rivières. Two practice sessions will take place on Saturday, August 11, while qualifying and the feature race, will be held on Sunday, August 12 immediately after the NASCAR Pintys race. For more information about the GP3R, visit www.gp3r.com Follow CSCC_LMS on its new website: www.stock-car.ca, on twitter: @cscc_lms and on Facebook at stock-car.ca Registered drivers : 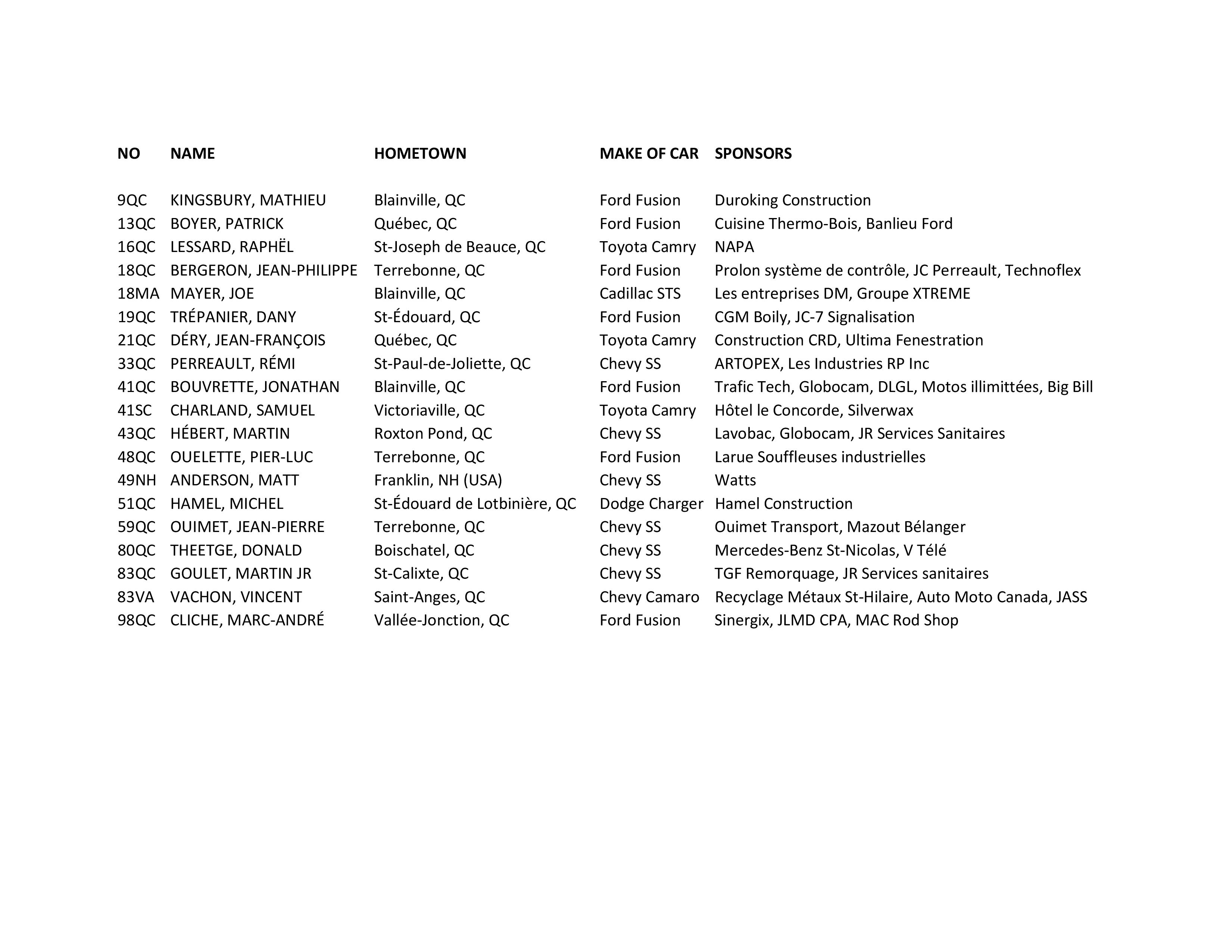