CSCC ROUND 5 : 200 LAPS OF ACTION  MULTIPLE STRATEGIES FOR THE WIN DÉRY WINS THREE IN THREE 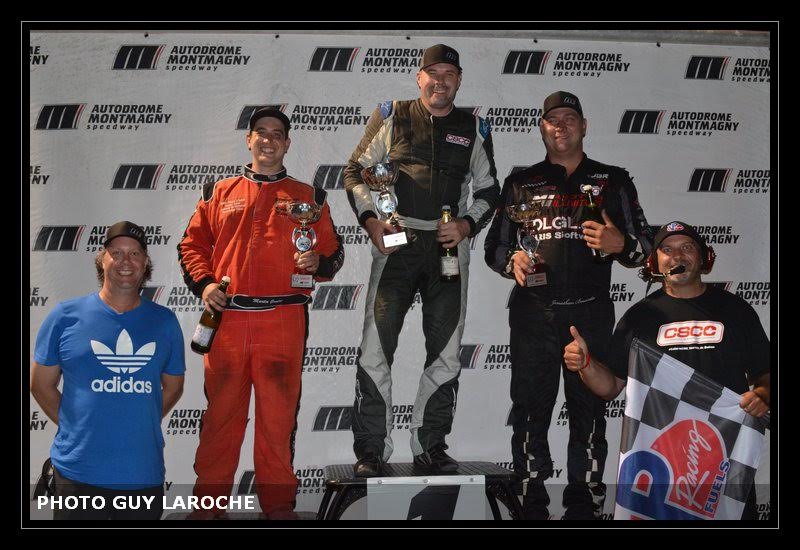 The 200 lap race was held on Autodrome Montmagnys (Montmagny, QC) 5/8-mile oval under extreme heat conditions which were very difficult for both drivers and cars as the temperature reached well above 30oC and was over 50oC in the driver cockpits. For a first time since 2013 (250 laps at the time), the Quebec LMS drivers competed in a long distance event. For safety reasons, a mandatory caution was held on lap 90 to allow competitors to fuel their automobiles and provide a cold beverage to their drivers. Nothing else could be done at that time. They could pit at any time for right side tires, introducing strategy in the race. Some pitted early, others mid race and a few gambled for a later pit stop. Patrick Cliche of Lévis won the Eibach Canada Spring to the pole award by starting from the pole starting position. Started along side, on the front row, Terrebonnes Pierre-Luc Ouellette, but Cliche quickly jumped in front and took control of the race. Eventual winner, Jean-François Déry, who started 4th, wasted no time and took only 3 laps to get to second, bringing with him Mathieu Kingsbury and Jonathan Bouvrette, both from Blainville, and dropping Ouellette to fifth place. The group of five cars was racing single file while others behind were side-by-side. They were on a record setting pace. On lap 21st, Trepanier overtook Ouellette for fifth. At the same time, Martin Goulet Jr was able to get around rookie Jean-Philippe Bergeron who had been defending his position since the drop of the green flag. Stuck behind them were Simon Roussin, Claude Leclerc and Gaetan Gaudreault who were seeking a hole to get around them. Cliche was starting to build a lead over the others. At lap 32, he was starting to lap back markers and he wasnt slowing down. With just 1 lap shy of the mandatory pit stop for fuel window, at lap 69, Michel Hamel spins his car and brings out the first caution. Jonathan Bouvrette dove to pit lane and took some right side tires. No one else followed him down pit lane. Winning strategy? On lap 90 Officials put out the mandatory caution. Each team sent two crew members to fuel the cars and a third crew member to attend to the driver with a cold drink. Nothing else was allowed. Once everyone completed the fuelling, the field took another lap before the pits were open for pit stops. At which time, Jonathan Bouvrette, Simon Roussin, Martin Hébert and Gaétan Gaudreault did not pit and stayed on the track. Pier-Luc Ouellette, Jonathan Desbiens and Vincent Vachon visited the pits for adjustments; while Patrick Cliche, Jean-François Déry, Mathieu Kingsbury, Dany Trépanier, Martin Goulet Jr, Claude Leclerc and Michel Hamel pitted for right side tires. Bouvrette and Roussin, then Bouvrette and Dery put on quite a show racing side-by-side for the lead. At the halfway mark, the top-5: Bouvrette, Déry, Roussin, Kingsbury, Oulette and Goulet. None of them was giving an inch. But its Dery who overcame Brouvette for the top position on lap 101 and never gave it up until the checkers. The third caution came out on lap 160. This time Simon Roussin, Pier-Luc Ouellette and Martin Hébert took on some fresh right side tires. With everyone having pitted, the 40-lap sprint to the finish would sort it out. During a 3-car battle, on lap 166, Kingsbury loses control of his car and spins... only to be collected by Martin Hébert who had no were to go. He was done for the night. Kingsbury visited pit road to deal with body work and a broken caliper before returning to the race. Just as the field was going green Cliche relinquishes his 4th place to dive on pit road with a flat tire. Lucky for him, Kingsbury goes off course with brake issues. The two of them would return in time for the green flag. At the restart, Déry, Bouvrette, Goulet, Trépanier and Ouellette, but Goulet lose many precious positions and finds himself in 6th place. Ten laps later, at lap 176, Roussin goes for a spin in turn 1. Fourth caution. Its still Dery and Bouvrette who set the pace, followed by Trépanier, Ouellette and Goulet. Lap 185, Ouellette goes for a spin. With fifteen laps to: Déry, Bouvrette, Goulet, Trépanier, Cliche, Roussin, Kingsbury, Leclerc and Ouellet are all on the lead lap. Cars are door handle to door handle. At the finish its Déry, Bouvrette, Goulet, Trépanier, Roussin, Cliche, Kingsbury, Leclerc and Ouellet who complete the 200 laps distance. Martin Goulet Jr gets the Les Constructions Alain Gaudreault Hard Charger Award with a +7. Vincent Vachon scores the best Montreal Hitch Rookie Award with a 10th place finish and only one lap down. Martin Hébert (14th), Rémi Perreault (15th) and Jean-Philippe Bergeron (17th) did not finish the race. Heat race winners were: Jonathan Bouvrette and Dany Trépanier. A blind draw was held for a 5 gal of VP racing fuel, presented by DL PERFORMANCE and VP Racing Fuels Quebec and the winner was Jean-Philippe Bergeron. The next and 6th round of the Canadian Stock Car Championship, will take place on the streets of the Grand Prix de Trois-Rivières on August 11th and 12th. The Late Model cars will be at the GP3R for the first time since 2004 in a 41 laps or 100 km race sponsored by Festidrag.tv and Quebec Citys Concorde Hotel. Follow CSCC_LMS on its new website: www.stock-car.ca, on twitter: @cscc_lms and on Facebook at stock-car.ca